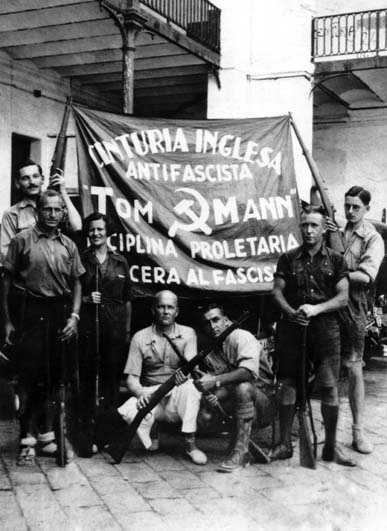 Our Internacionale socks were so popular that they will be back in stock from 7pm on the 05 September 2014. They will fly out once again so set your alarms, make sure the pub has good WiFi!

The following article was written by Dr Richard Baxell, author of Unlikely Warriors.

On 18 July 1936, a military uprising was launched in Spain, in an attempt to overthrow a democratic republican government, elected only five months previously. Though the rising was initially successful in much of Spain, opponents quickly took to the streets, erected barricades and confronted the insurgents. Faced with determined opposition, the rebel generals saw that their rebellion was in real danger of being defeated. With their best soldiers, Franco’s elite Army of Africa, trapped in Morocco, the Rebel officers turned to fascist Italy and Nazi Germany for assistance. After some hesitation, both Hitler and Mussolini sent help, providing vital aircraft to ferry Franco’s troops across the Strait of Gibraltar onto the peninsula, where they were able to head rapidly north, leaving a trail of slaughter and destruction in their wake. The involvement of the fascist dictatorships intimated that a Spanish military rising threatened to escalate into a European civil war.

To many foreign onlookers it was now apparent that Spain had become the latest battleground in what one British liberal newspaper, the News Chronicle, described as ‘a world war in embryo’. Fearful that yet another country was about to succumb, anti-fascists from around the globe decided to involve themselves in the Spanish Republic’s struggle – in the words of one young Londoner, ‘to defend democracy with deeds’. Seen within the wider context of the struggle of democracy against international fascism, the volunteers believed passionately that the Spanish Republic’s fight was their fight.

Over the course of the civil war, 35,000 men and women, from over fifty countries, would volunteer to fight for the democratic government. Although a number served in militia units, in the Republican navy, or as pilots and aircraft technicians, the majority fought in International Brigades, divided up into battalions based principally on the language and nationality of the volunteers. The French (the largest contingent) formed a number of units, such as the André Marty and Commune de Paris Battalions; the Germans fought in the Thaelmann Battalion, Yugoslavs in the Dimitrov Battalion, Italians in the Garibaldi Battalion. Most English-speaking volunteers were placed in the 15th International Brigade, the last to be formed, which included the American Abraham Lincoln Battalion, the Canadian Mackenzie-Papineau Battalion (known, almost universally, as the ‘Mac-Paps’) and the British Battalion. Over the course of the war, some 2500 volunteers from Britain, Ireland and the Commonwealth fought with the British Battalion, and more than 500 were to die in Spain.

A number of the British volunteers are now widely known, in particular George Orwell, though he actually fought with a militia unit rather than with the brigades themselves. In addition to the trade unionist Jack Jones, prominent Britons who joined the International Brigades included poet and writer Laurie Lee; Tom Wintringham, founder of the Home Guard and the Common Wealth Party; Winston Churchill’s two nephews Esmond and Giles Romilly; (Sir) Alfred Sherman, later an ideologue and speechwriter for Margaret Thatcher; speedway motorcyclist Clem Beckett; and actor James Robertson Justice, who came to prominence in the ‘Doctor in the House’ films. However, most Britons who went to Spain were neither celebrated nor famous. Rather they were ordinary men and women from modest working class backgrounds, hailing from great smokestack cities such as London, Glasgow, Liverpool, Manchester and Newcastle. Despite claims to the contrary, only a few of them were jobless when they left for Spain, with a large proportion employed in industrial occupations, including construction, ship-building and mining. Most were politically active – perhaps as many as three-quarters were members of the Communist Party – but those with an alternative political stance or who hailed from the trade union movement were also accepted. The ages of the volunteers were older than sometimes believed; the average was just under thirty, with most aged between twenty-one and thirty-five. Some even had a degree of military know-how, although it was not always particularly useful; one Manchester volunteer, for example, had served in the Territorial Army, but had done so as a drummer and the value of his expertise was probably limited.

Despite such inexperience, the International Brigades provided some of the Republic’s best troops, particularly at the beginning of the war. They were repeatedly thrown ‘into the heart of the fire’, on occasions demonstrating almost suicidal bravery and suffering appallingly heavy casualties; undoubtedly their sacrifice helped prolong the life of the Spanish Republic.

After two years of fighting, those still alive were withdrawn by the Spanish premier, Juan Negrín, in a vain attempt to secure international help to mediate a peace with Franco. But with the military might of Germany and Italy behind him, Franco had no need – nor did he ever intend – to enter into negotiation. Bled to death, the Republic essentially collapsed. Hopes of the supporters of democratic Spain from around the world were dashed. ‘In Spain,’ wrote French writer and philosopher Albert Camus, ‘[my generation] learned that one can be right and yet be beaten, that force can vanquish spirit, that there are times when courage is not its own recompense.’

It was not till almost forty years later, following the death of Franco in 1975, that the veterans’ hopes of a return of democracy to Spain were rekindled. The remarkably smooth political transition which followed, the legalisation of the Communist Party in 1977 and, five years later, the election of the Socialist government of Felipe González and his offer of Spanish nationality to the surviving veterans, all heralded a new era. Gradually, interest returned in the actions of the men and women who had been derided during the Cold War as ‘premature anti-fascists’. When the former volunteers were called upon to talk about their time in the Spanish Civil War, most remained overwhelmingly positive about their experiences. Many echoed the view of Scottish volunteer Phil Gillan, expressed more than fifty years after the war, that ‘there’s no way I could fault myself for going there. I think it was absolutely right and the longer I think about it the more convinced I am that I was right. And I think that events proved conclusively that we were right.’ Fellow Scot Tommy Bloomfield summarised the feelings of many former members of the British Battalion in the Spanish Civil War when he described how ‘today, as a pensioner, I live on social security, but I’m the richest man in the world having known my comrades in the International Brigades.’ Time had done little to dampen his ardour either for the cause of Republican Spain or for his choice to risk his life fighting for it. ‘If I had my life to live over again,’ he stated confidently, ‘I would do the same.’

Three-quarters of a century on, the Spanish Civil War remains a live issue. In Spain, the controversial disinterring of victims on both sides continues and an acrimonious battle rages over whether the future of that still young democracy depends on the memory or the deliberate forgetting of the conflict. Yet many in Spain still harbour intense gratitude for the sacrifices made by the 35,000 men and women who came from around the world to fight for the Spanish government in the legendary International Brigades. During the two-minute silence of remembrance at a football match between England and Spain at Wembley on 12 November 2011, a Spanish supporter held aloft a sign bearing the image of four bright red poppies. Beneath the flowers, it bore a simple, poignant message: ‘We also remember. XVth International Brigade. British Battalion ’36.’